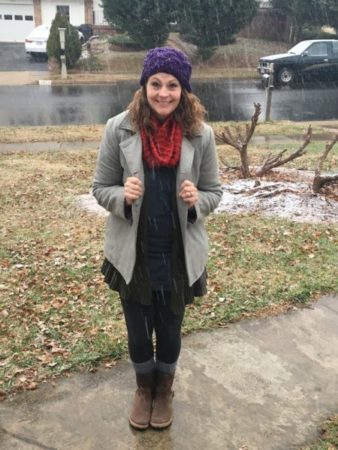 Reflections on my Dressember Experience

Have you ever learned something that totally changed your perspective of the world? That once you knew it you could never go back to the way you saw everything before? This is how I felt after learning that there are millions of people trapped in modern slavery today. TODAY. In a time when slavery is supposed to be a thing of the past, eradicated, over. In truth, there are more slaves today than any other period in human history. It exists in the form of sexual slavery, forced labor, debt bondage, forced marriage, property grabbing, and human trafficking. It happens in almost every community around the world and it is growing.

January is Human Trafficking Awareness Month and we want to let you, our amazing fair trade community, know that while our efforts to combat human trafficking continue all year long, this is a specific time to focus on learning more about what we can do to stop it. Early in December we wrote about a fundraising campaign called Dressember in which advocates create awareness and raise funds to end human trafficking by wearing dresses or ties for an entire month. While in the past I was pulled to participate myself, arguments such as, “I don’t have enough dresses; It’s too cold; I’ll be traveling for the holidays,” always swayed my commitment. However, the deeper, more hidden voices that said, “What if I don’t raise enough money? What if no one else cares about this as much as I do? What if I put myself out there and I fail?” were what really held me back. I continued to watch others advocate, but after two years learning about and working with fair trade businesses, the urgency to stop watching and start doing won. This was not about me or my comfort, but about something much bigger.

So, on December 1, 2017, I put on one of my five dresses, made my first social media posts, and held my breath. What happened next? People showed up. I remember exactly where I was when I got the first alert from my Dressember donation page and I almost cried. From there I continued wearing dresses, making posts, and answering questions. I started with a small fundraising goal, enough to provide a rescued trafficking victim with eight hours of therapy, but through the efforts of friends, family, coworkers, and even anonymous donors, we raised nearly double the original goal! Along with these donations came immeasurable support as well as opportunities to connect with people on this subject in a way I never had before. I answered questions about my strange attire on such cold days and even learned about others who had hearts for this endeavor as well. I now realize that, had I not even reached my fundraising goal, I would not have failed. These conversations, this opportunity to shed a light on some of the darkest corruption in the world, is important too. What feels small as an individual, a $10 donation or a 5 minute conversation, causes a ripple effect when combined with another $10, another conversation, and so on. The small efforts of many can add up to something huge.

Next December, we hope you’ll join the Fair Trade Winds team as we continue to support Dressember and their grant partners. Our goal will be to raise enough money to fund an entire rescue operation to bring trafficking victims safely into freedom. We would love your help to spread the word, donate, or even join our team! But don’t forget that you can also help by the way you choose to shop….right now. We are proud to currently partner with several artisan groups that are working specifically to bring men, women, and children out of human trafficking.

Visit any of our store locations or our website to learn more: https://www.fairtradewinds.net/human-trafficking/.

Thank you for walking beside us in these efforts. We could not do this without you!