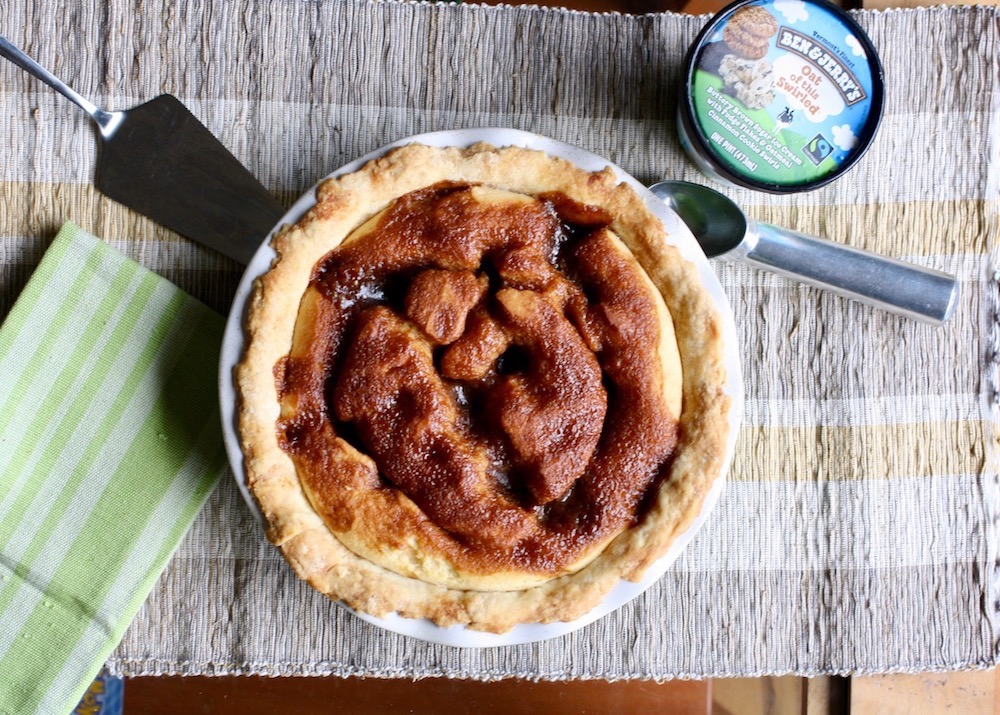 For Pi Day (3-14), we have made something that is definitely pie, based on an irresistible cookie!

This gem of a recipe is originally from the Better Homes and Gardens Cookbook (with the familiar red gingham cover). It is obviously a favorite of the everyday cook, and you can use nearly all fair trade ingredients to make it. Let’s get started!

If you think it’s a bit daunting to make a pie that’s a cookie AND a pie AND you have to make cinnamon syrup first, just think: No need to spoon out cookie dough, bake, and repeat. Bake this for 45 minutes and it’s done! Eating snickerdoodles in pie form (with gooey cinnamon) is now our favorite way to eat them. We also recommend this pie for breakfast. Celebrate 3-14 all day!

Preheat oven to 350ºF. Line the crust in a 9-inch pie plate and pinch the edges.

In a small bowl, combine the tablespoon of sugar and ½ teaspoon of cinnamon. Brush the melted butter on the bottom of the pie crust, then sprinkle over 1 teaspoon of the cinnamon sugar mixture.

In a small pan over medium heat, combine brown sugar, ¼ cup butter, water, agave, and the remaining ¾ teaspoon cinnamon. Stir to dissolve the brown sugar, and let the mixture boil gently for 2 minutes. Remove from heat and stir in ½ teaspoon of vanilla.

In a standing mixer or with an electric hand mixer, beat ¼ cup softened butter on medium speed for 30 seconds. Add in the ½ cup of granulated sugar, powdered sugar, baking powder, salt, and cream of tartar. Beat in egg and 1 teaspoon vanilla. Gradually beat in the milk until just combined. Finally, beat in the flour.

Spread the mixture evenly into the pie plate. Swirl the cinnamon syrup over the top. Sprinkle the pie with the remaining cinnamon sugar and cover the edges of the pie shell with foil.

Bake pie for 25 minutes. Remove the foil, and continue to bake until the top of the pie is puffed and golden brown, for about 20 more minutes. (We checked at exactly 20 minutes and a toothpick inserted in the middle came out clean, so be careful not to overbake).

Cool for at least 30 minutes. We served this with Ben & Jerry’s Oat of this Swirled fair trade ice cream since it features a cinnamon-y oatmeal cookie swirls, but any fair trade flavor would be delicious! 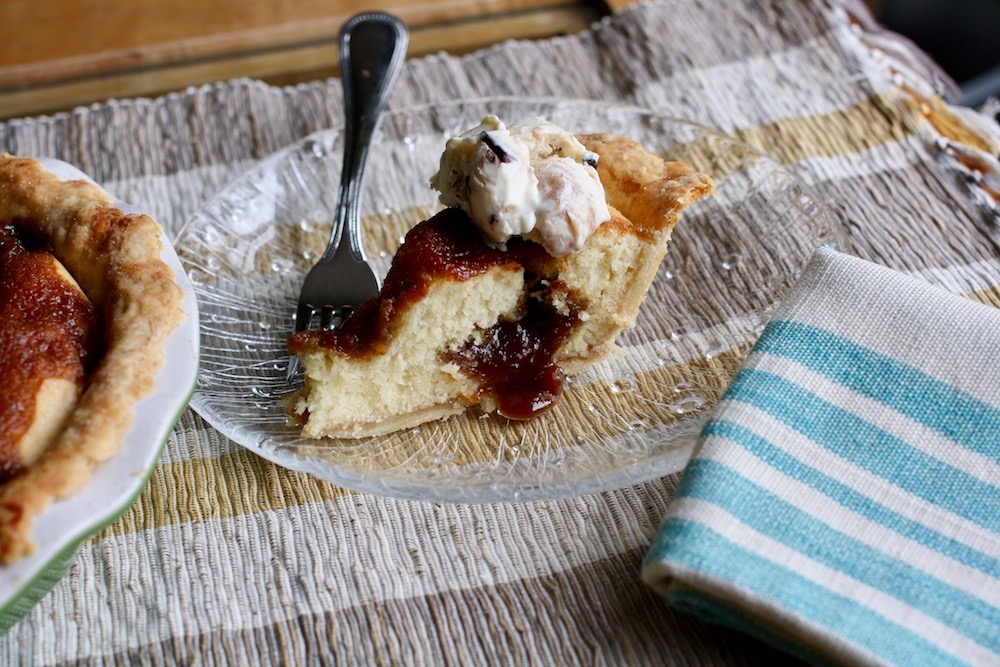 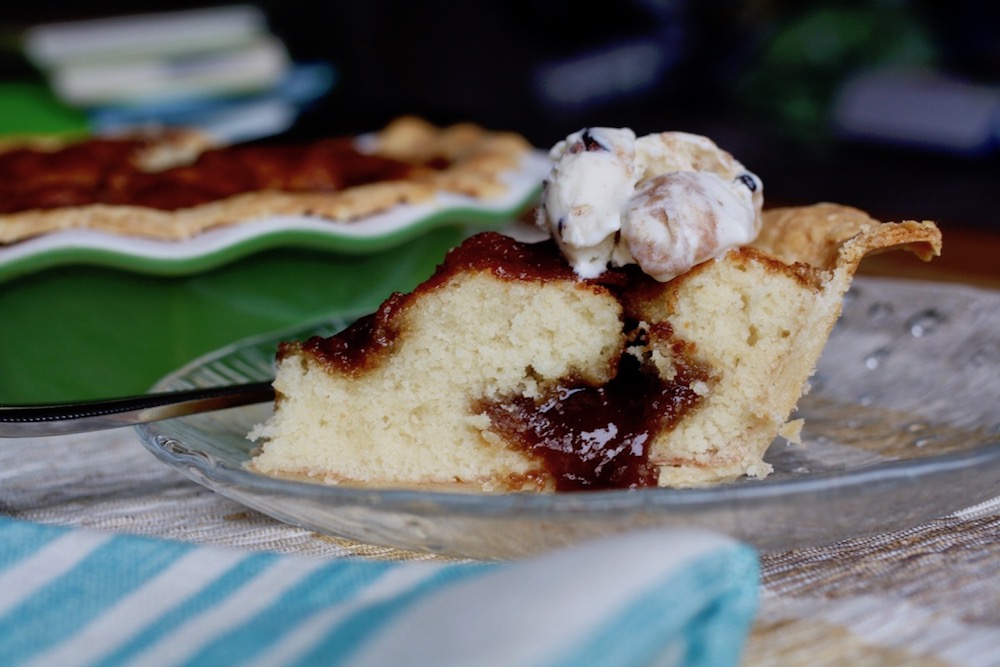 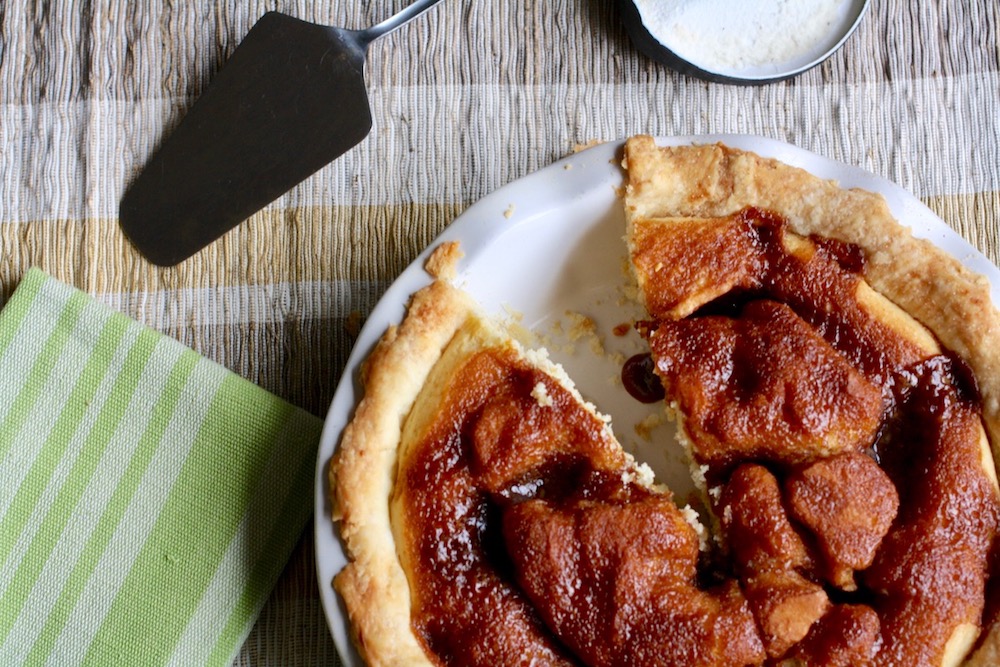 There is no such thing as too much pie! Check out all of the delicious ways we have celebrated Pi Day the fair trade way: