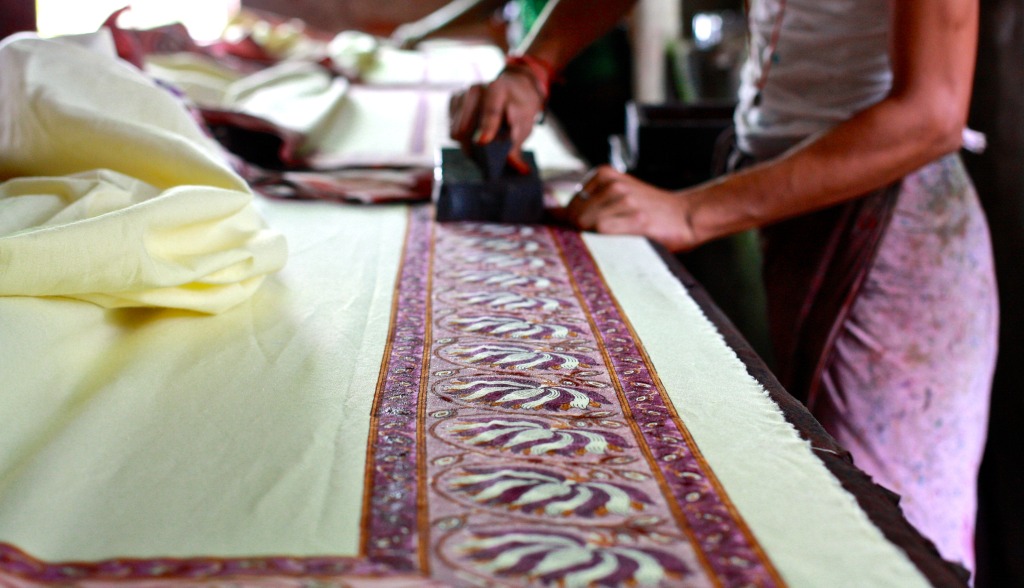 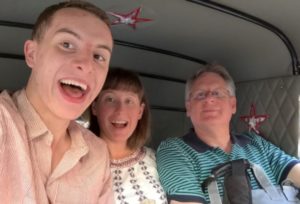 Just a couple weeks ago, my dad (Paul) and my cousin (Ben) and I finally headed to India. We planned our trip carefully, making sure we got to spend enough time with the artisans and also get a feel of India itself; we wanted to see, taste, smell and hear all that the golden triangle of Delhi, Jaipur and Agra have to offer!

Our trip began in Delhi, where we spent the night before going to Jaipur. Our journey from Delhi to Jaipur was a great introduction to India. We had to catch a 6:00am train, so our driver had arranged to pick us up at 5am. We stopped to pick up Rebecca from CFM, whom we had met the night before and would be coming with us to Jaipur. We were running a bit late, but our driver made up time on the road and even pleaded with a traffic guard to let us through at one point, saying he must deliver us to the train.

The train station smelled of smoke and metal. We followed Rebecca through a maze of sleeping people waiting for their trains, clustered on blankets, using their packs as pillows. We ran to our platform and hopped aboard just as the train took-off. Then it was a long 4 hours to Jaipur, but we got tea and breakfast! 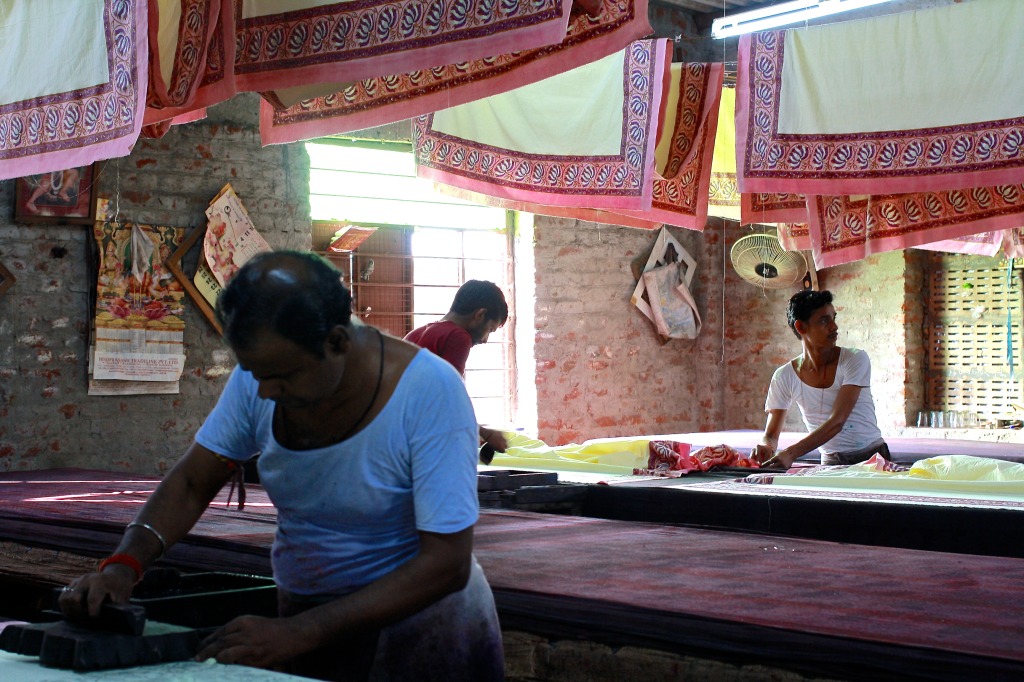 The next day we visited the block-print workshop, run by a woman named Anjana, and got to know the artisans and learn about the art of block-printing. When we arrived at the workshop the artisans were on their lunch break so we waited a few minutes with Anjana until everything was in full swing. We were accompanied by Karan, who works for CFM and acted as translator. The block-print workshop is right off of a main road in Jaipur, which is a bustling city full of street vendors, traffic, busy pedestrians and even a few chain stores. In the time it took to ride down the bumpy driveway past the vegetable carts, cows and line of parked motor bikes, we were transported to a world where tradition thrives and crafting something with your hands is not only an art form, but a way of life.

As we entered the workshop the men were quiet, except for their tapping. Every few seconds there was tap – tap-tap – tap-tap. It was the sound of the stamping. The men rotate around long tables, each doing one block and color at a time. The border is done first, then the outline in the center, then the colors. It took four men over 30 minutes to do the center of one 60 x 90 lotus tablecloth. 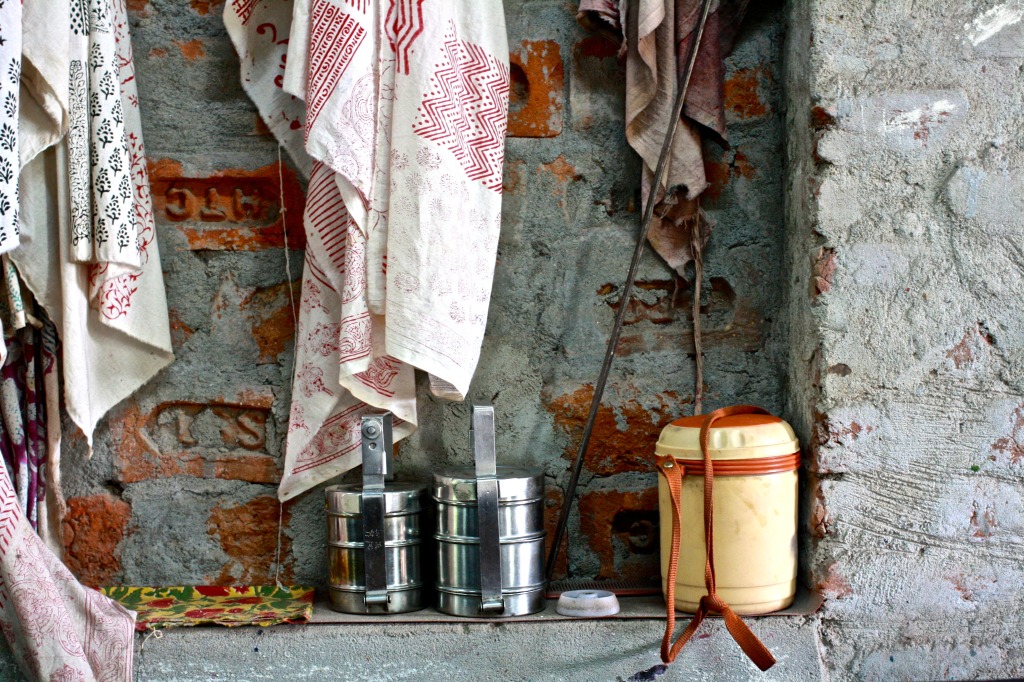 Block-printing is an extremely labor-intensive process. The men intuitively stay in rhythm, pressing the block just hard enough to get inked, and not too much or it will smear. Then they expertly line up the block and pound two taps with the side of their hand. Reaching for a block-printer’s hand, Karan said you can tell a block-printer from the common man on the street by the feel of his hands. A block-printer’s hands are hard and calloused on the side from tapping; the men all smiled and proudly held out their hands for us to touch.

Today, block-printing is a somewhat dying art as more and more young people go to college and leave the villages and towns for the bigger cities. The men at Anjana’s workshop, however, are proud of their work and were happy to show us their technique. Karan informed us that about half of the men are generational block-printers, meaning they inherited the craft from their fathers, and the other half are younger men who have moved from more rural areas to Jaipur to learn the craft. They are all hopeful that the art of block-printing will continue to thrive. 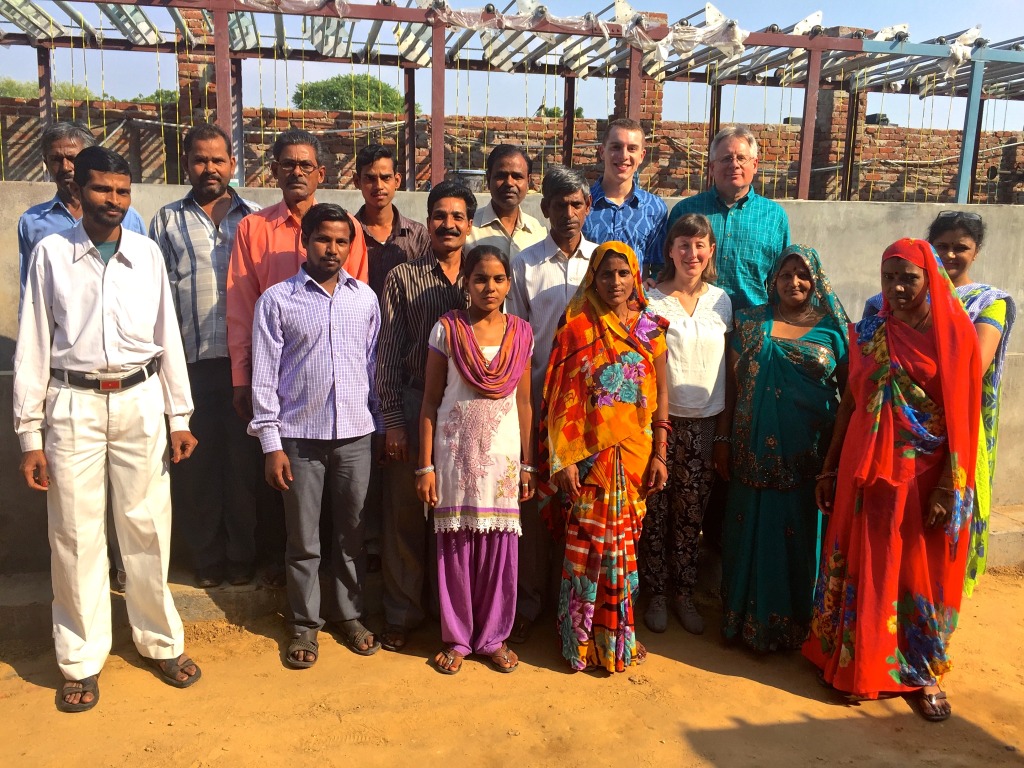 Jubilee Traders employs 8 men and 4 women. The women handle quality control, checking to make sure each linen comes out the correct size and color, with no extra markings or bleeding from the dye and snip off any hanging threads from the edges. The oldest woman (wearing teal above) also made sure the workshop was in order and regularly brought everyone water, chai and snacks – her samosas were delicious!

Our last day at the workshop was particularly fun. Karan helped us arrange a lunch for the workshop, which was a huge success! The lunch was catered by a local company who really went all out; they set up tables, hung decorative cloths and even set up a brick and charcoal grill to make the chapati (yummy flat bread common in the north). It was quite a feast! The block-printers all changed from work clothes to their street clothes before eating and introduced themselves to us. They all shook my dad’s hand, except for the women who seemed to address me, with a nod of the head and hands pressed together. Everyone filled their plates and we all stood eating. I think the artisans enjoyed watching us try everything and Karan kept asking, “Not too spicy?” I didn’t think it was, but my dad’s nose was running which got some giggles.

After lunch Karan took a group photo and as soon as he was done, the artisans hurried over to see the picture on the phone. Seeing the success of the first photo, the women requested a photo with myself, Anjana and Rebecca – a “girls only” photo. The oldest woman guided me between them and squeezed my hand, her face all smiles. Anjana translated that we must send them each a copy. 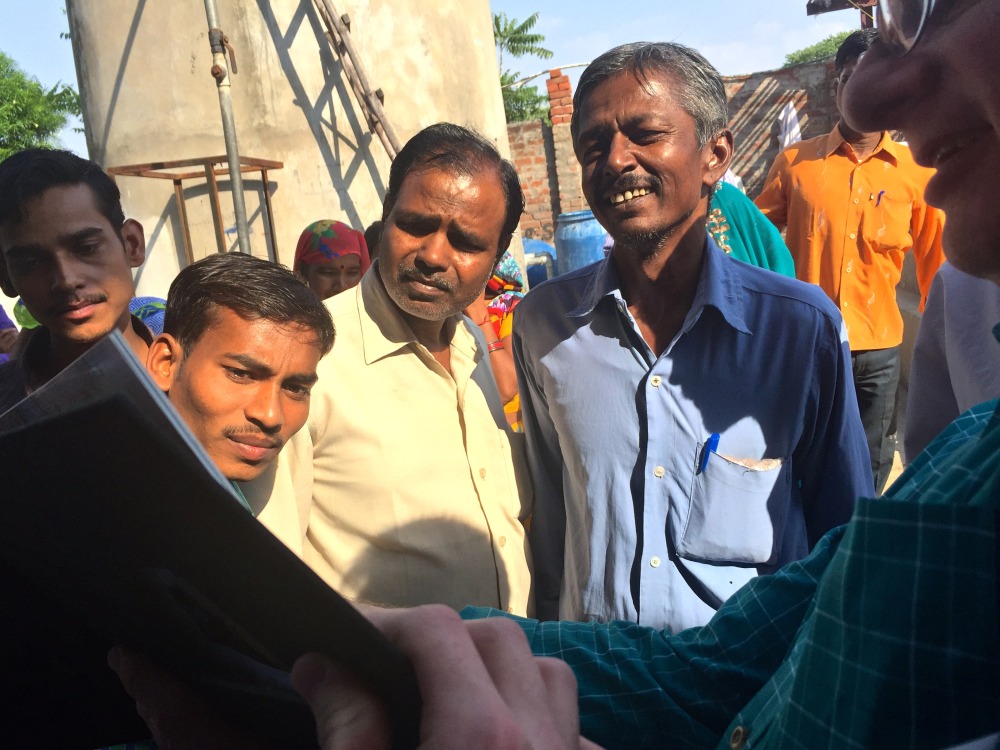 After our lunch, we gave each artisan a gift. We wanted to thank them for the work they do and for letting us be apart of their world, if only for a few days. We brought each artisan a book of photos showing their beautiful linens in stores across the U.S. and some happy customers holding their purchases. The book came packaged in an envelope and at first the artisans were nervous to open it, but my dad opened one and they all huddled around to see the photos. They really enjoyed seeing their work on display and had all sorts of questions about where the photos were taken and who everyone was. It was nice to be able to show them the final leg of the linens’ journey as the step from store to customer is a crucial part of the fair trade chain. We were honored to show the artisans that their work is appreciated by U.S. customers and we could tell they were proud to see it on display.

That evening when my dad, Ben and I returned to our hotel, we were all a bit giddy, talking about the day’s events and laughing at things that weren’t really funny. We realized, perhaps not in so many words, that what we had done was very special. To not only see fair trade in action, but to physically be a part of it, is greatly inspiring and something we will not quickly forget. Indeed, I think we will always remember our first trip to India and as our minds now race with ideas for the future of Jubilee Traders, we will picture each member of the workshop and know that what we invest in is not a product, but a relationship – one that we are excited to nurture and grow.

Thanks for reading, and stay tuned for more posts on fair trade in action!

How to Become a Fair Trade University: An Inside Look