Why Real Vanilla Should Be Considered A Luxury

Why Real Vanilla Should Be A Luxury

Next Time You Make Something Vanilla-Flavored, Make Sure It’s Fair Trade!

According to a recent BBC article,

“Less than 1% of the world’s vanilla flavour comes from real beans.”

The other 99% – prevalent in everything from cupcakes to candles – is artificial vanillin which is made from coal, tar, rice bran, wood pulp, or cow dung, but most often from petrochemicals. Be sure to check the ingredients on the label of your next pint of ice cream. If it says “vanilla flavor” or “artificial vanilla” it’s not the real deal. Look for “pure vanilla extract” or “vanilla beans.”

Demand for real vanilla has increased in the last few years as more consumers want authentic products made with real ingredients. Giant companies like Hershey and Nestle have put extra strain on the vanilla market because they have begun using more real vanilla in their candies.

Similar to other specialty commodities like coffee and cocoa, vanilla pods only grow in certain ideal conditions, which can only be found in specific spots on the globe. One such spot is Madagascar, where there is a perfect balance of high humidity, shade, and moderate temperatures. But Madagascar is a small island and very remote. The vanilla harvest is a lengthy process that takes in-depth farming knowledge that has been passed down from generation to generation on the island.

Some facts about vanilla production:

Vanilla prices have skyrocketed over the last few years.

The increase in demand for real vanilla, coupled with severe weather that affected the crop out-put lead to an extreme price increase for vanilla in the last three years. Many small business that used real vanilla could not afford to purchase vanilla at such a high price so we saw many ice cream shops opting out of the traditional vanilla flavor.  Sweet shops had to be creative in finding ways to make-up for the loss of such a staple product, but with such an extreme market shift, they had to adapt. 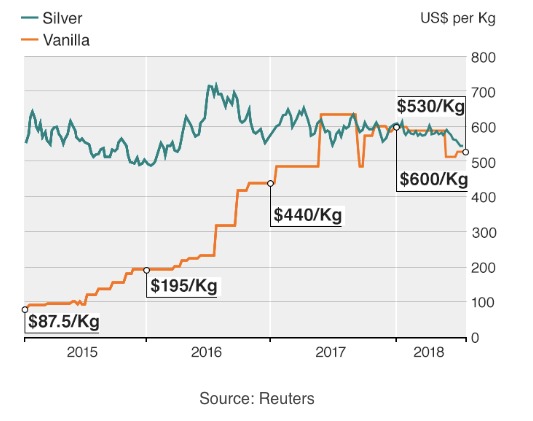 For vanilla farmers in Madagascar, this price increase has brought nothing but turmoil. People from outside their communities want to take advantage of the high price of vanilla and try to steal the pods right off the plants. The farmers use tactics like marking each and every pod with their initials so buyers in the market will know they were stolen, but when that doesn’t work, the famers have to be prepared to use more extreme tactics including standing guard in their fields, machetes in hand, ready to protect their crop and themselves from greedy thieves. Most vanilla farmers in Madagascar would prefer the price returned to it’s lower, more stable price.

Below are pictured some of the farmers who work with Level Ground Trading. They are small scale landowners (between 0.5 and 2 acres) in the Ibanda District of Uganda. They practice mixed farming including bananas, coffee and vanilla as well as food for their families. In 2016 when the price of vanilla really began to increase, Level Ground took action to remedy the fluctuation in the market that did not hurt the farmers. Level Ground decided to cut the number of beans per package in half from 10 to 5, meaning the consumer paid more than double for the same amount of beans, but the farmers still were paid a fair trade premium price for each harvest.

Level Ground was transparent about these changes for the consumer and we were able to pass on that information to our customers when they looked for vanilla in our stores. Savvy consumers knew the situation with real vanilla and were still happy with the pricing as they knew the product would be high quality and the farmers were paid fairly. 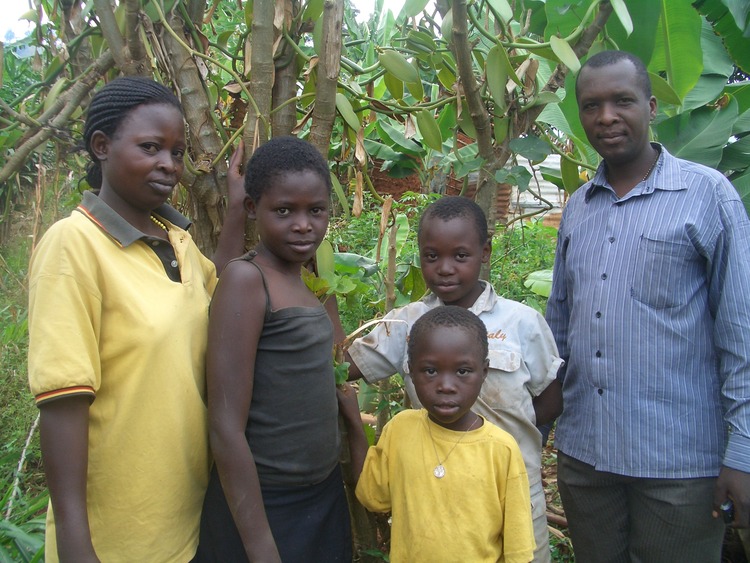